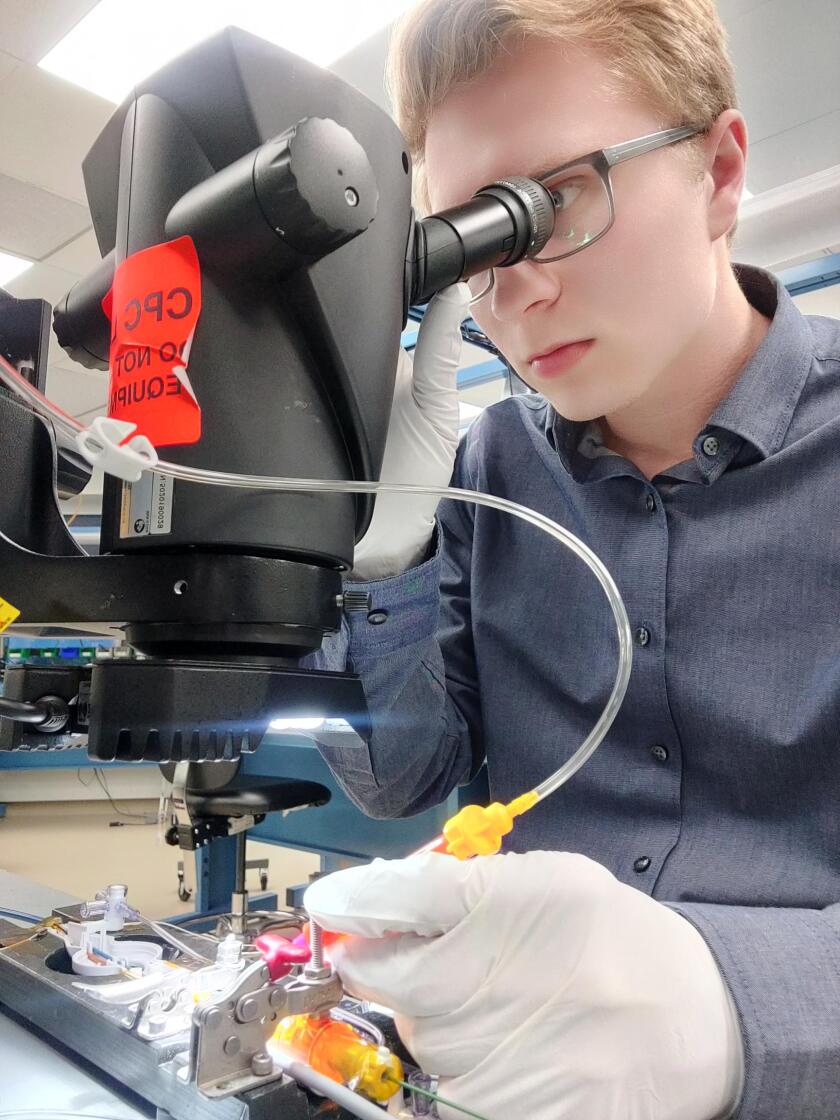 Max Salzer, who will be a senior in the fall, said receiving the merit-based scholarship was exciting, and he is looking forward to the benefits it brings.

“For one, they pair you with a mentor of your choosing, so someone who is either a previous Astronaut Scholar alumni or a NASA engineer,” he said. “Just to ask them questions and make connections with what they are doing in the industry.”

Salzer, who is majoring in mechanical engineering, got interested in engineering while working on his family’s farm in Barnum. On the farm, Salzer worked with machinery and learned how to solve problems.

“From a young age I enjoyed problem solving,” he said.

While he initially went to NDSU to study agricultural engineering, he said he switched to mechanical engineering and swapped his minor around a handful of times before finally landing on robotics.

Salzer said he made the change as he felt mechanical engineering more aligned with what he is interested in pursuing for a career.

According to an NDSU news release, the Astronaut Scholarship Foundation was created to ensure the U.S. maintains its leadership in science and technology by supporting some of the best science, technology, engineering and mathematics college students.

In the news release, NDSU Provost Margaret Fitzgerald said the scholarship is an important national recognition of Salzer’s achievements.

“We are proud of his accomplishments and delighted that he has received this noteworthy acknowledgment of his talents,” she said.

Keerthi Nawarathna, a faculty fellow in the Office of the Provost and associate professor of electrical and computer engineering, added that Salzer was selected to the “elite group of students” from 40 school across the country.

“Internal selection at NDSU was very tough this year, as NDSU received nominations from a large group of talented students,” he said.

While Salzer has already been awarded the scholarship, he will travel to Orlando, Florida, in August to accept it and to present his work and meet with other recipients and alumni. Salzer said he is looking forward to the opportunity as it will give him a chance to meet some of his fellow recipients and present the research he has worked on.

At NDSU, Salzer has worked both part- and full-time as an undergraduate research assistant. One project involved converting agricultural waste material into higher and sustainable value-added products.

“As a research assistant, we identify problems and propose solutions and help the world either be more economical or sustainable in the future,” he said. “That really tied in well with the Astronaut Scholarship.”

He is also currently an intern in the Twin Cities working for Abbott, a medical technology company, where he is on a team developing a next generation type of catheter.

“This summer has been an amazing experience. Abbott has an amazing internship program,” he said.

Salzer is on track to graduate in Spring 2023 and said he hopes to work in the biomedical engineering field for a couple of years before he pursues master’s and doctoral degrees.

When going after the new opportunities, he added the scholarship could help open more doors.

“It is a very well-known research-based scholarship,” he said.

Salzer also offered advice to students who may be along a similar path in engineering.

“Don’t be afraid to go out of your comfort zone and try something new,” he said. “Apply for big scholarships — you never know what might happen.”

The Reckitt Fight For Access WASH Accelerator for Social Entrepreneurs.

Welcome to SeniorNG blog, SeniorNG is very happy to have you. The main goal of SeniorNG is to provide scholarship and job information that will assist domestic and international students looking for financial aid to study, grow, and travel abroad and also those in search of job opportunities.